Inflatable Rescue Boat (IRB) racing is an exciting sport that gives surf lifesavers the chance to put their rescue skills to the test. IRB crews consist of a driver and a crewperson. The objective of the IRB race is to rescue a ‘patient’ or ‘patients’ from the water in the quickest time. 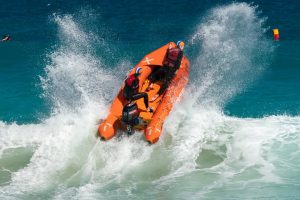 A surf boat is an oared craft used by a crew consisting of five competitors, four of whom shall be rowers and the fifth who shall control the boat by a sweep oar.  Popular in Australia, crews are trained in boat handling technique in various beach conditions. 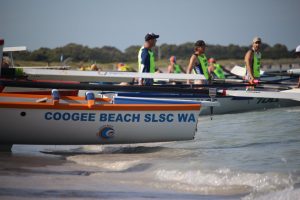 Teams are comprised of one patient, one driver, and one crew member. The patient is in the water at a designated buoy, the driver and crew member are at the starting line at the on the beach. On the starter’s signal, competitors launch the IRB, proceed through the surf to pick up the patient, round the buoy, and return to shore.

Teams are comprised of one patient and two crews (one driver and one crew member per crew). On the starter’s signal, the first crew launches the IRB and proceeds through the surf to the patient. As the IRB rounds the buoy, the first crew member jumps overboard. The driver completes the buoy turn and returns to shore alone.

The second crew member moves into the water, and takes control of the IRB. The first driver runs up the beach and tags the second driver. The second crew re-launches the IRB, proceeds through the surf to pick up the patient and the first crew member, rounds their buoy, and returns to shore to finish the event.

Teams are comprised of one driver, one crew member and two patients. Both patients start the event in the water. The crew proceed through the surf, pick up their first patient and return to shore. The driver and the patient must exit the IRB where the patient retires to the beach. The driver proceeds to the start/finish line, rounds a marker and returns to the IRB. The IRB is re-launched and the crew rescues the second patient, returns to the beach and across the finish line.

Teams are comprised of one patient, one driver, and one crew member.

This event is a continuous relay involving the four events in the following order: Rescue Tube, Mass Rescue, Teams Rescue and Rescue. Each leg is per the description above except for changeovers between legs.

A boat crew consists of five competitors, four rowers and a sweep who controls the boat by use of a sweep oar and commands to the rowers.

Boat crews start at the water’s edge holding their boats ready. On the starting signal, crews row to their assigned turning buoy approximately 400 metres off shore and return to the beach. The winner is the first crew to pass their boat between the finish flags on the beach.

Some events are conducted as short course which is approximately 250m off shore.

For viewing on mobile devices please turn your device horizontal.